Analysis: 45 Years of Fatal Crashes in the United States

On Behalf of Haug, Farrar & Franco, PLLC I Car Accident

In March, 2022, the U.S. Department of Transportation’s National Highway Traffic Safety Administration released it’s annual traffic crash data to the public, revealing that over 38,000 people were killed in motor vehicle collisions across the nation.  This was the highest number of deaths since 2007, despite the pandemic and pandemic response impact on lowering overall traffic volume.   In fact, fatal crashes increased by nearly 7 percent over 2019.

The NHTSA also reported that in 45% of fatal crashes, the drivers of passenger vehicles were engaged in at least one of these behaviors: speeding, alcohol impairment, or not wearing a seat belt.

These findings led us to examine the changes in fatal crashes in the U.S over a longer time frame.  We worked with data analysis firm 1Point21 Interactive to examine 45 years of fatal crash data. 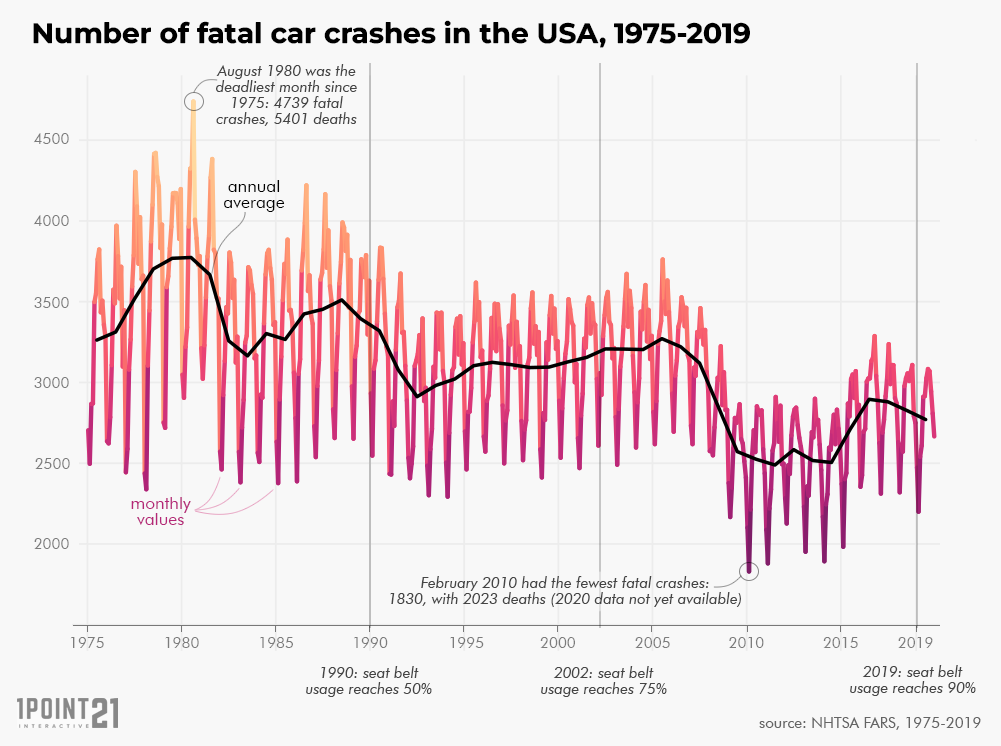 While the total number of crashes has declined by nearly 15 percent over the 45-year period, there are significantly more vehicles on the road and, collectively, the U.S. drives far more than it did in 1975 – thus exposing more people to more potential danger on the road.  Rather than simply looking at the total number of crashes, examining the fatal crash rate takes this into account and shows how drastic the change has really been.

We adjusted the rate by vehicle miles traveled (vmt) to calculate a rate per million miles driven.  The chart below shows that in 1975, the fatal crash rate was nearly 3 times that of 2019.  If the fatality rate of 2.94 held to 2019, we may have seen as many as 95,731 fatal crashes instead of the 33,766 that actually occurred. 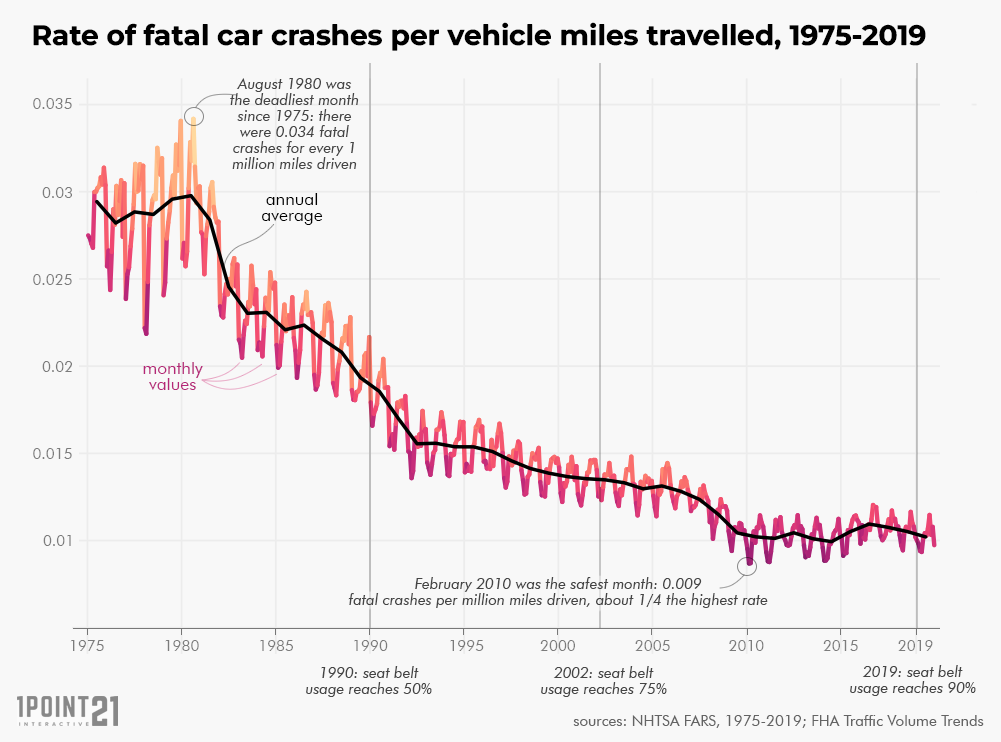 What is Driving the Drop in Fatal Crashes?

There are likely a whole host of factors that have contributed to the reduction of road fatalities and the dramatic decrease in the fatality rate per mile traveled.  Of course, vehicle technology has improved greatly and safety features have grown in both number and availability.  However, the single factor with the greatest impact on road safety has been the increase in seatbelt usage. 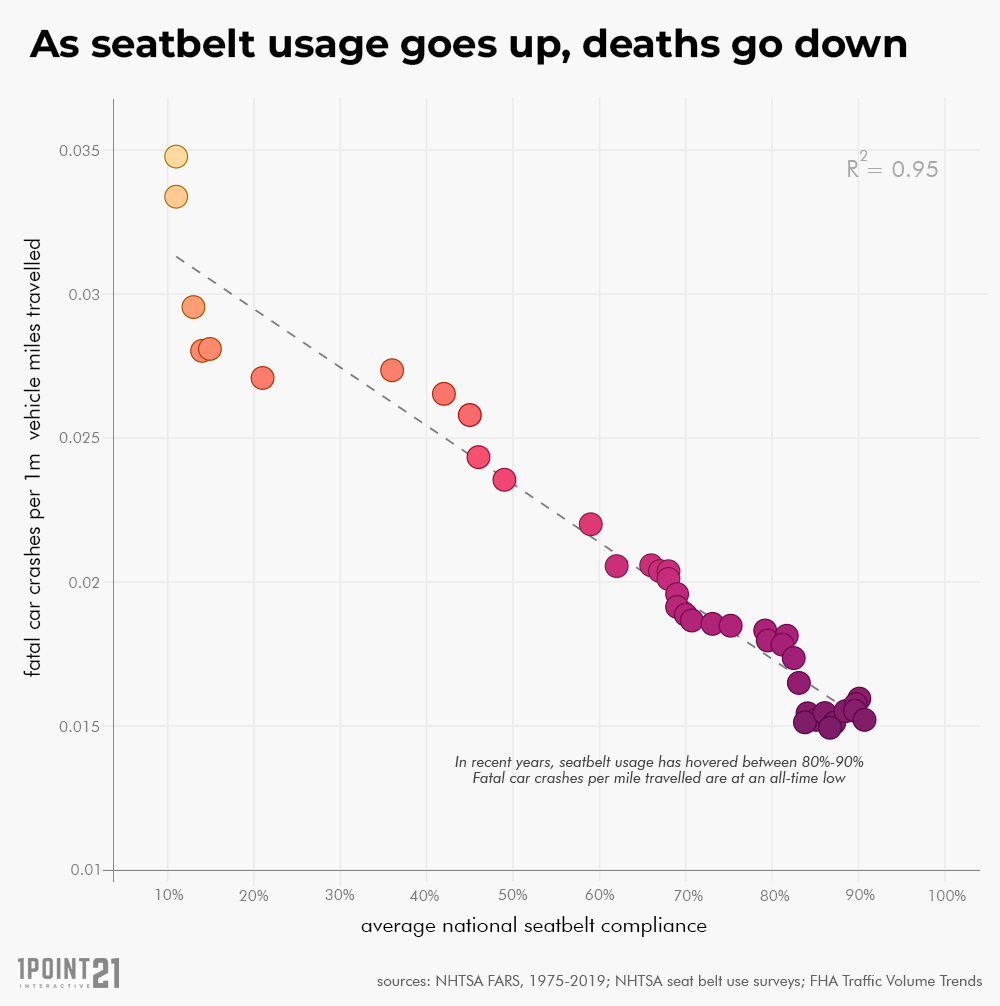 In 2019, the seatbelt usage rate across the United States was right around 91 percent compared to just 11 percent in 1980. Consider that the fatal crash rate per million miles traveled in 1980 was over three times that of 2019 and it becomes clear how stark the impact of seatbelt use has been on road safety.

At the same time, seatbelt awareness campaigns have driven public awareness and helped to change public perception of seatbelt use beginning in 1985 when the Ad Council and the National Highway Traffic Safety Administration (NHTSA) partnered to launch the Seat Belt Education campaign.

The Deadliest Month on U.S. Roads

As you might expect, fatal crashes peak in the summer months, with August and July seeing the most fatal crashes each year, respectively.  From 1975 through 2019, an average of 3,545 fatal crashes occurred in August each year.  These months fall in the 100 deadliest days of summer, a period where fatal crash risk increases significantly for teen drivers. 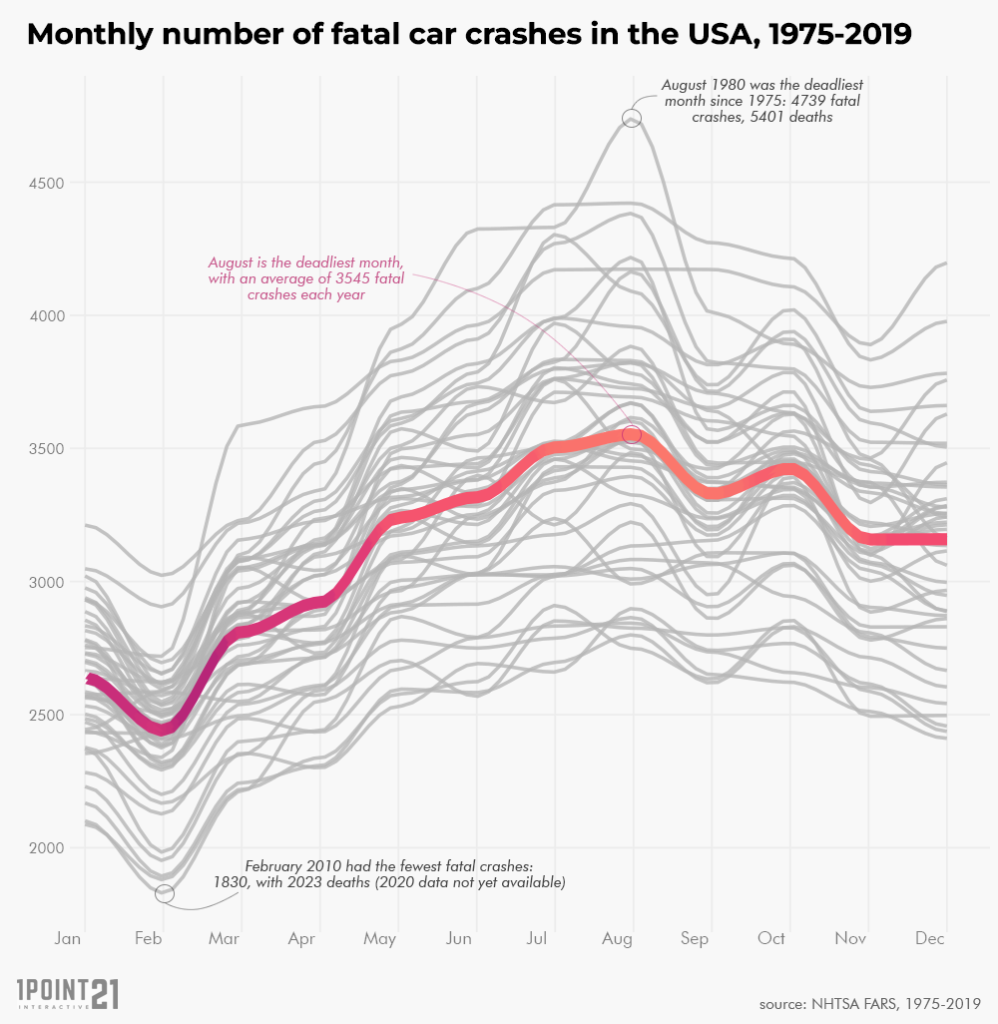 Conversely, February has seen the fewest fatal crashes – however, it is the shortest month of the year.  Interestingly, February is the only month to have recorded less than 2,000 crashes, having occurred five times during the study period.

The deadliest single month?  August 1980 with 4,739 fatal crashes and 5401 deaths – nearly 34 percent more crashes than the August average.  The heat map below shows fatal collisions for each month during the 45-year observation period – each square representing a single month. 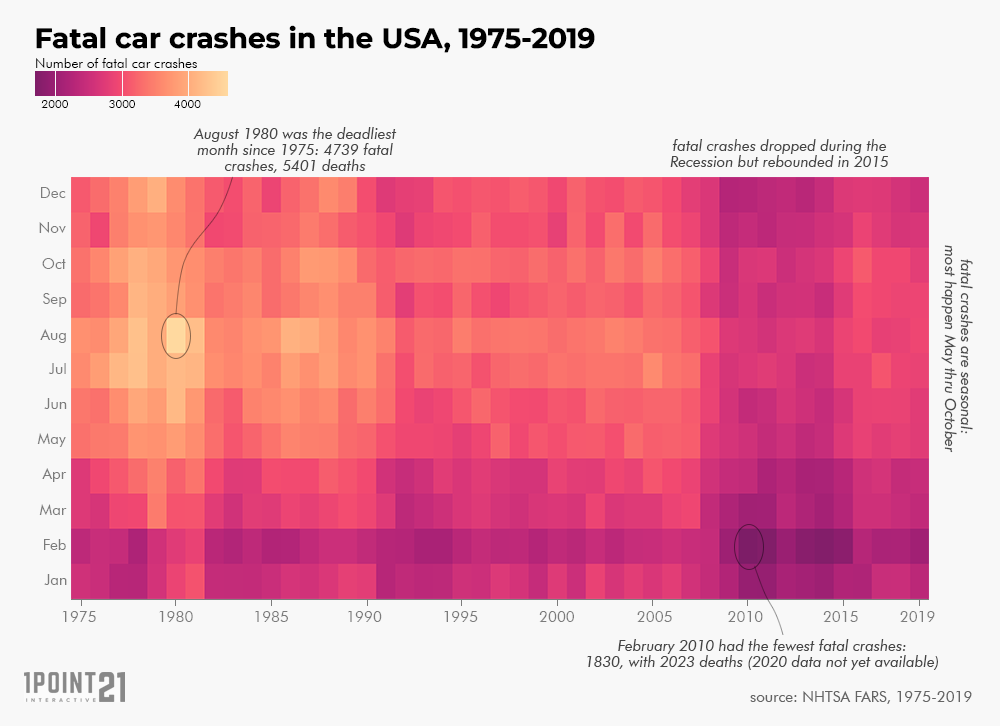 This visualization also shows the trend of declining fatal crashes as evidenced by the cooling of the colors.   However, when we examine fatal crash rate, it becomes even more clear. Notice the drastic change in fatal crash rate moving from left to right. 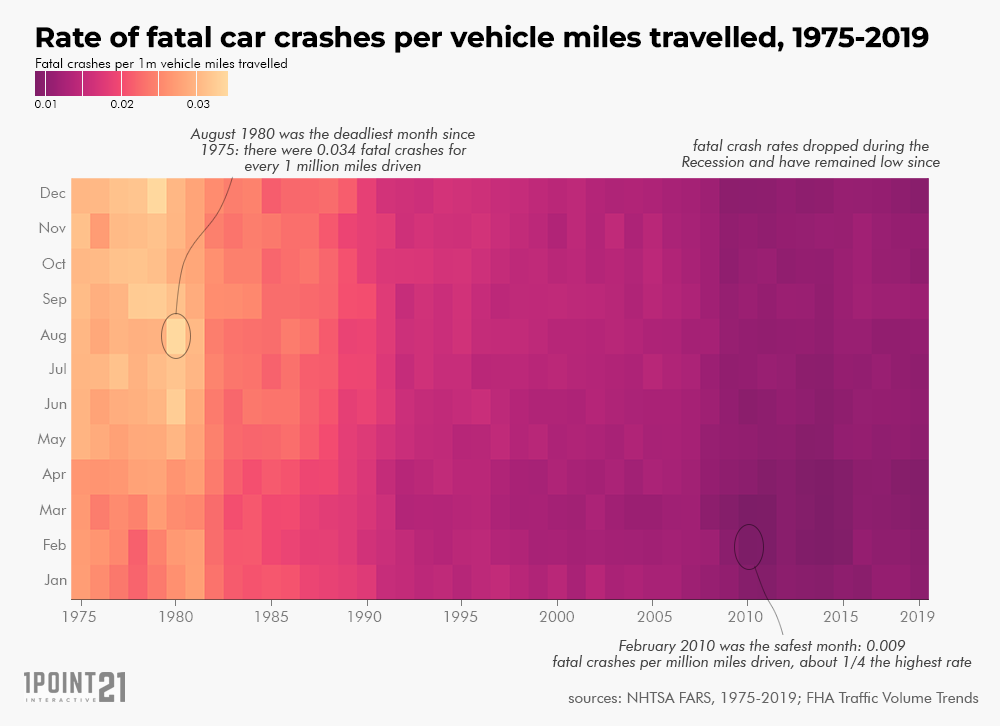 Data Sources and How To Use This Information

The analysis and visualizations on the page are based on fatal crash data, vehicle miles traveled (VMT), and seatbelt use data from the NHTSA from 1975 through 2019.  The 45-year observation period allows a long view of the change in the safety of our nation’s roads and the impact that certain behaviors and laws can have.

The obvious takeaway from this analysis is that seatbelts work and it is advisable that every occupant of a motor vehicle wears a seatbelt at all times – regardless of any law requiring that they do so.   It will be interesting to monitor the impact that changing attitudes towards distracted driving and, perhaps, the adoption of autonomous vehicles has on road deaths and fatality rates in the future.

If you would like to republish any of the findings or share the charts or images found in this report, please provide attribution by linking to this page.