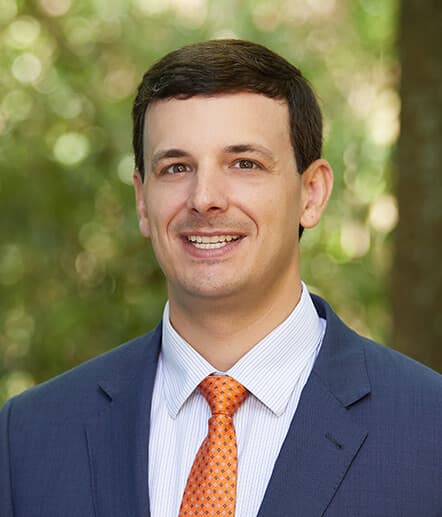 Jonathan Franco joined the firm as a partner in July 2017. He was raised in Montgomery, Alabama and attended the University of Alabama, where he received his undergraduate degree in political science, with a minor in English. Jonathan went on to earn his law degree at Mississippi College School of Law in Jackson, Mississippi.  Jonathan resides with his wife Ashley Franco and daughter Alexandra in Ocean Springs.

Jonathan is a past president and is still an active member of the Ocean Springs Rotary Club, which keeps him very active in the community.  Jonathan was selected to the 2019, 2020, and 2021  Mid South Super Lawyers Rising Stars. The Super Lawyers list recognizes no more than 5 percent of attorneys in each state. The Rising Stars list recognizes no more than 2.5 percent of attorneys in each state.   Jonathan is active in Mississippi’s preeminent trial lawyer and personal injury lawyer association, the Mississippi Association for Justice (MAJ). Within MAJ, he serves on the Board of Governors representing the Jackson County Circuit Court division.  He is a past editor of MAJ’s annual publication, Voir Dire magazine and currently serves on MAJ’s public policy committee. Jonathan is the 2018 recipient of MAJ’s “Rising Star” award given to a trial lawyer under 40 years of age who has excelled in personal injury litigation.  Jonathan was also selected in 2019 and 2020 to The National Trial Lawyers Top 40 Under 40 Civil Plaintiff attorney in the State of Mississippi. Invitees must exemplify superior qualifications, trial results, and leadership as a young lawyer under the age of 40.

Jonathan has substantial experience representing victims of commercial motor vehicle crashes such as tractor trailer crashes.  Jonathan applies the Federal Motor Carrier Safety Regulations (“FMSRs) in successfully prosecuting tractor trailer crashes.  The FMSCRs are federal regulations  that govern the maintenance, hiring, and driving practices of trucking companies and truck drivers.  Jonathan will investigate the trucking company and their driver to make sure they did not place profits over safety.

Jonathan has also represented hundreds of Mississippi Gulf Coast residents that were involved in car crashes.  Each car wreck case involves its own set of fact and challenges.  Jonathan does not recommend settlements unless they make the client whole.  If an insurance company is not willing to pay a reasonable settlement amount in a car wreck case, Jonathan will file a lawsuit and fight to recover a satisfactory settlement for your case.

Jonathan maintains a substantial workers’ compensation practice and represents injured Mississippians across the state.  Jonathan takes particular pride in helping injured workers who are being denied medical treatment and disability benefits by their employer and its insurance company.  He would rather fight for the injured worker of this state than a big corporation or insurance company.  Jonathan also represents shipyard and maritime workers’ who fall within the Longshore and Harbor Workers’ Compensation Act.  Jonathan also has experience representing claimants in Jones Act claims and general maritime/boat injury claims.

Ocean Springs Rotary Club, Past President, Board of Directors

American Association for Justice, 2013 to Present

Mississippi Association for Justice (MAJ), Board of Governors, 2013 to Present